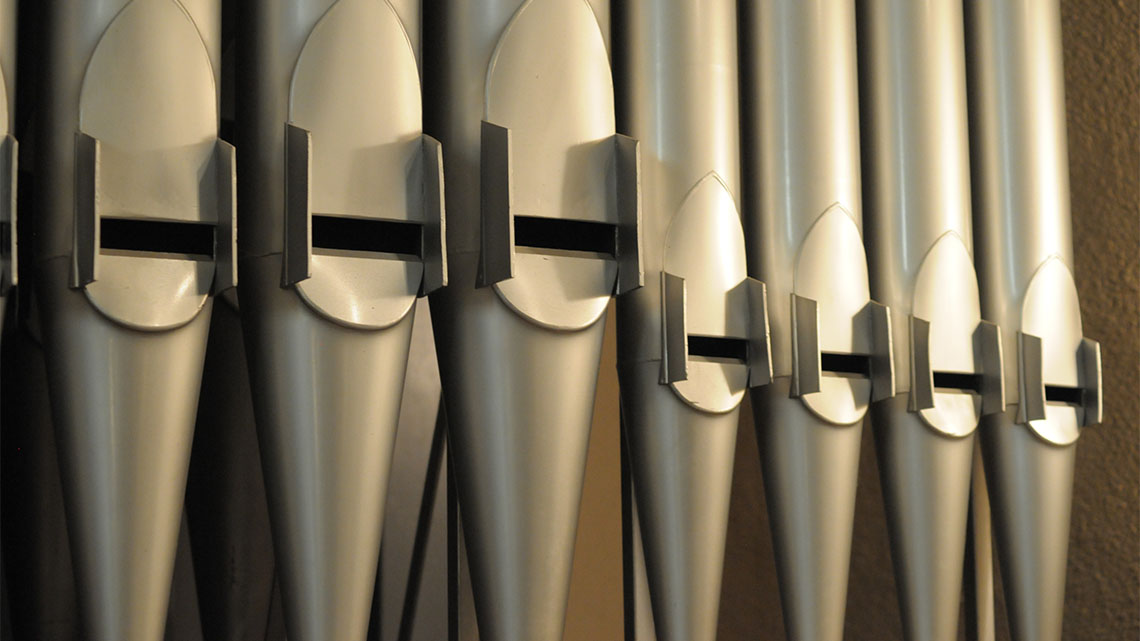 St. Barnabas officially opened on January 10, 1890. Six years later, a contract was signed with Casavant Brothers, Organ Builders of St-Hyacinthe, QC, for a new organ, Op. 77, to be placed in the left-hand side of the chancel. This small instrument of 2 manuals and pedals had a specification of 10 stops.

On April 29, 1929, after a lengthy meeting led by the rector, the Rev. Herbert W. Browne, the momentous decision to proceed with building a new church took place. The first church was converted for the purposes of a parish hall and has since been replaced by a newer building. The organ was installed in the new church, which was dedicated on October 20, 1931. The Dedication booklet states that the organ was rebuilt and enlarged by the Franklin-Legge Co., Ltd. of Toronto and placed in a chamber on the left-side of the chancel, behind the pulpit.

A note of warning appears in the Festival of Consecration booklet of October 20, 1952: “We face a serious expense in the near future, when because of age and decay the organ will have to be rebuilt”. Church organist, Harry Lloyd, a former pupil of Dr. Healey Willan, assisted by Gerald Wheeler, organist and choirmaster of St. Matthew's Church in the Glebe,  directed the design and installation of a new instrument, built by Hill, Norman and Beard (England), in the gallery at the “west” end of the church. The instrument of two manuals and 20 stops was dedicated on October 25, 1958.

In June 1979, preliminary talks took place between the church and François Caron Inc. (authorized representative of Casavant Frères Ltée) concerning repairs and restoration of the Hill, Norman and Beard organ; however, the only outcome was the installation of a 3-rank Mixture on the Great manual and some minor repairs. In June 1981, an organ fund committee was formed after several assessments and a cost quotation were received from François Caron. Chaired by Rosemary de Catanzaro, and including organist Dr. Godfrey Hewitt (who had recently left the post of organist & choirmaster at Christ Church Cathedral), the committee was responsible for planning and implementing fund-raising activities to cover the $94,060 cost for a major rebuilding of the instrument. The console was replaced (the surround being retained), new wind chests were installed and a large amount of new pipework was added, bringing the specification to 29 stops. The new organ was blessed and dedicated on October 24, 1982, as a memorial to those members of the congregation who gave their lives in two world wars.

During the fall of 1995, Wesley Warren completed a scheme to beautify the organ case and help blend in the rather plain brown façade with the richness of the church's Byzantine interior. The swell box mechanism was replaced in the summer of 1997. Minimal attempts had been made in 1982 to match the large amount of new pipework to the sound of existing ranks, and a disparity in tonal balance and intensity remained. During the summer of 1998, all of the pipework was removed by Sylvain Brisson Pipe Organ Builders and shipped to Montreal for cleaning, adjustment and revoicing. The careful balancing of stops and divisions by Alain Baumgarten has accomplished a gentler, less aggressive and more homogenous sound. Set in the majestic acoustics of the building, the organ speaks from the rear gallery with great vibrancy of tonal character and colour. In addition to accompanying the liturgy, the organ is used frequently for concerts and recitals, and the congregation is justly proud of what they consider to be one of the finest instruments in the city. (excerpt from A Short History of the Organ by Wesley R. Warren [1998], available from the Parish Office)