Evensong returns to St. Barnabas with a fanfare! 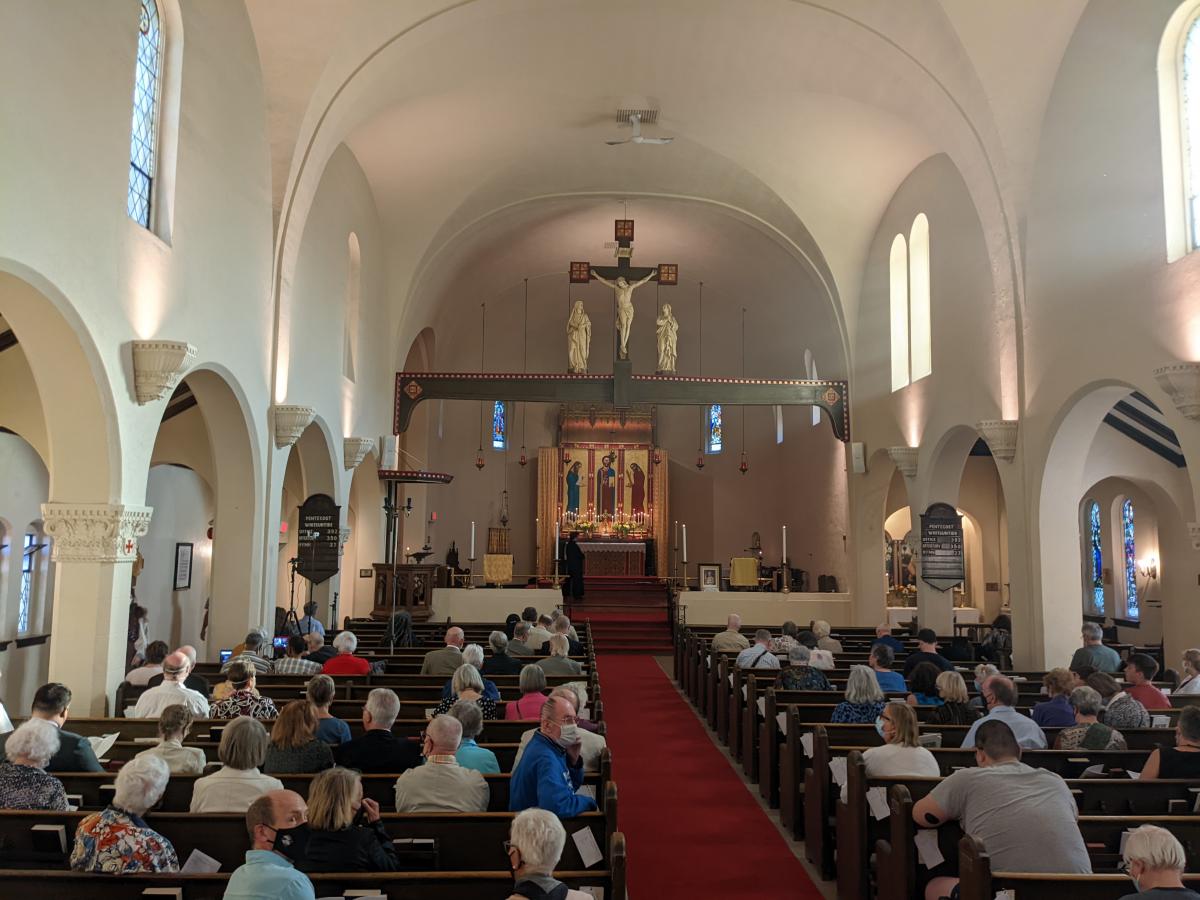 BY L.K. O’CONNOR
Reprinted from the September 2022 issue of Crosstalk, the newspaper of the Anglican Diocese of Ottawa

O enter then His gates with praise. It was a beautiful Sunday evening in early June. As the conductor, organist, choristers, tympanist, and trumpeters were putting the finishing touches on the evening’s music in rehearsal, people poured excitedly in the doors of St. Barnabas Anglican Church to attend the Festal Solemn Evensong for Her Majesty Queen Elizabeth II’s Platinum Jubilee. The sounds of Evensong had been silent – and much missed – since the last  prepandemic Evensong service in early March 2020. It is safe to say that Evensong returned with a fanfare! Some 175 people – all wearing masks – were in attendance, filling all the pews.

Praise Him with the sound of the trumpet. Wesley R. Warren, organist and choirmaster at St. Barnabas, and Kirkland Adsett, organist and choirmaster at St. Matthew’s, organized an ambitious programme of music, grand and joyous, fitting to celebrate the Queen’s 70 years on the throne. The music for Her Majesty’s Coronation at Westminster Abbey in June 1953 and the Silver Jubilee Thanksgiving Service in 1997 was echoed in their choices. The combined choirs of St. Barnabas Anglican Church and St. Matthew’s Anglican Church, Ottawa sang C.V. Stanford’s setting of Psalm 150 and his Evening Service in B Flat Major, the thrilling coronation anthem Zadok the Priest by G.F. Handel, and Vaughan Williams’ setting of Old 100th (All people that on earth do dwell), as well as leading the Royal Anthem (God Save the Queen), hymns, and responses. There were about 30 singers – too many to fit in the gallery! A tympanist, Sean Donaldson, and three trumpeters, Sean van Gulik, Davide da Silva, and Shaw Nicholson, were engaged to make the music offerings even more festive. Kirkland Adsett conducted the combined choirs, and Wesley Warren accompanied on the pipe organ, with Donald Russell offering the organ postlude. Remarkably, only two intense rehearsals were required to prepare all the music – thanks to all the musicians!

Long live our noble Queen. Following the spirited readings, the coronation anthem, and the intercessions prayerfully led by the Rector, the Rev. Canon Stewart Murray, the Rt. Rev. Peter Coffin, retired Bishop of Ottawa and former Bishop Ordinary of the Canadian Armed Forces, gave an uplifting sermon. He spoke of kingship and queenship, and of our own temporal and sacred obligations. He gave heartfelt thanks for Her Majesty’s long life, for her deep Christian faith, and for her example of unwavering constancy, service, and dedication. The Bishop described the oil of gladness with which Elizabeth II was anointed at her coronation – just as King Solomon had been anointed by Zadok the priest and Nathan the prophet thousands of years before her.

And all the people rejoiced! Real joy shone in people’s eyes – clergy, congregation, and musicians – during and after the Platinum Jubilee Evensong service. Hearts were uplifted in song, praise, and prayer. Since the service was recorded, more people, some 300 viewers,
were able to enjoy the service online a few days later, on the YouTube channel of St. Barnabas, Ottawa. The glorious sounds reflected both the solemnity and the jubilant pageantry of the unforgettable, once-in-a-lifetime celebration of the Queen’s Platinum Jubilee.