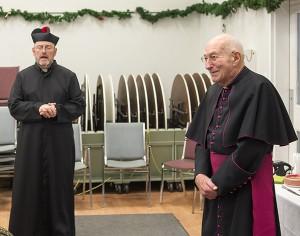 Marking a 90th birthday is a special celebration for anyone, but for Canon James Winters, to be able to continue in the role of honorary assistant at the Church where he served as an assistant Curate over 60 years ago is a particular blessing.

"You have been my inspiration," he said of the parishioners who gathered to wish him well with a birthday cake following the Dec. 21 High Mass. Fr. Winters officially entered the ranks of nanogenarians the day before.

Fr. Winters' career to date has been intimately associated with St. Barnabas. He was ordained deacon on June 11, 1951, St. Barnabas Day, served at the church as an assistant Curate, and ordained Priest in 1952. After several appointments, including the first full-time Chaplain of Ottawa Civic Hospital from 1960 to 1967, and Rector of St. Aidan's in Elmvale Acres from 1967 to 1978, he returned as Rector of the parish that year, until his official retirement, again on St. Barnabas Day, in 1980. His incumbency overlapped with the early career of the present Rector, the Rev. Canon Stewart Murray, who was ordained in 1979 and gave his first Mass at St. Barnabas on Dec.1 of that year. The two have known each other as colleagues for nearly 40 years.

[[{"type":"media","view_mode":"media_large","fid":"171","attributes":{"class":"media-image size-medium wp-image-3583","typeof":"foaf:Image","style":"","width":"283","height":"300","alt":"Canon James Winters is shown sprinkling holy water on the congregation, flanked by Fr. Stewart Murray on his right and Sub-Deacon John Fallows on his left."}}]] Canon James Winters leads the Asperges, or sprinkling of Holy Water, during High Mass on Dec. 21. He is assisted by Fr. Stewart Murray on the left and Sub-Deacon John Fallows on the right