May is Mary’s month, and I
Muse at that and wonder why:
Her feasts follow reason,
Dated due to season –

- Gerard Manley Hopkins, The May Magnificat

The month of May has traditionally been a time of popular piety and devotion honouring the Blessed Virgin Mary, the “Queen of May”. This custom is believed to have arisen in the 13th century; Alfonso X of Castile acknowledges the tradition of honouring Mary in May, in Ben vennas, Mayo, one of his Cantigas de Santa Maria:

Welcome, May, with Joy;
Please pray to Saint Mary
To pray to her son
That he keep us from the error of folly.
Welcome, May, and with joy. 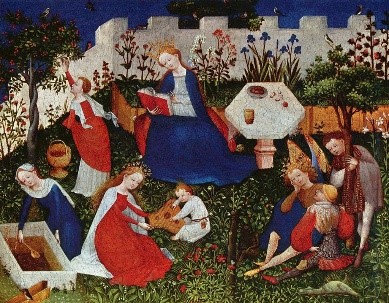 May is the month of new life, when nature comes into full bloom, and so it is that we honour the Virgin Mary, who gave new life to the world when she bore our Saviour, Jesus Christ. The tradition of Mary, Queen of the May, has mediaeval antecedents, it particularly flourished in the 18th century, and became a source of popular piety; images dedicated to Our Lady would be bedecked with the fresh flowers and herbs of Spring, as a popular hymn exclaims, 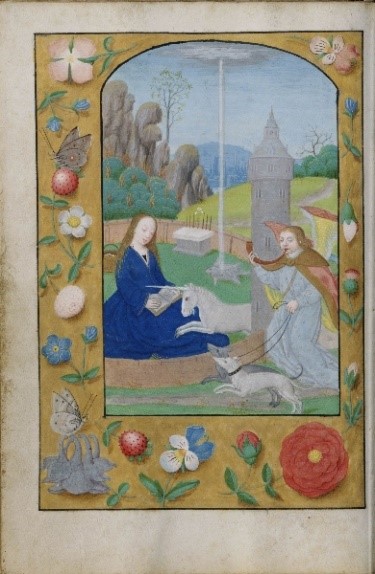 May devotions to Our Lady were officially recognized by Paul VI in the encyclical, mense maio, a year after he had declared her to be Mother of the Church. This tradition can be dated at least as far back as Ambrose of Milan who described the Virgin Mary as, a “type of the Church, which is also married but remains immaculate. The Virgin [Church] conceived us by the Holy Spirit”.

In Mary, biology and theology meet; her motherhood is theologically significant as the ultimate personal concretization of the Church. She is the Church in person and as a person. Ambrose admonishes us to,

Watch Mary, my children, for the word prophetically uttered of the church, applies to her also; “How lovely thy sandalled steps, O princely maid!” Yes, princely and lovely indeed are the Church’s steps, as she goes to announce her Gospel of joy: lovely the steps of Mary and the Church!

St. Augustine would also describe Our Lady in a like manner; “she is the [spiritual] Mother of the members of Christ, since by her loving devotion she cooperated in the birth of believers in the Church.”

The allegorical connection between Mary, the Church, and Canticle of Canticles, developed by Ambrose, became widespread in the Middle Ages, when iconography of Mary as hortus conclusus, or enclosed garden, (cant. 4:12-13), became popular. The perceived multiple expressions of Mariology and Christology in the fecundity of May and springtime, as each and every plant and flower denoted an aspect of the Virgin’s or our Lord’s virtues.

The elaborate Legend of the Unicorn was developed at this time, and was given theological weight; it was held that only a pure maiden could attract a unicorn, and so hunters would have a virgin sit in a forest glade as they waited in covert to slay the unsuspecting beast. This was understood as an allegory for the Virgin Mary, the Incarnation, and death of Christ: Jesus was born of a virgin and slain for the sins of mankind.

Images of Mary connected to trees and flowers could take on literal proportions, as Jesse trees depicted in illuminated manuscripts quite often had Mary sprouting out of their tops. Mary would also appear alongside Eve, her predecessor and counterpart in the garden of paradise, a reminder that Our Lady is the second Eve, a tradition which goes back to Irenaeus and the early Church:

Another early Father would write that, “Eve looks forward to Mary, and her very name ‘Mother of all the living’ is a mysterious presage of the future, for Life itself was born of Mary…”

Prior to the Reformation, England had a particularly strong devotion to the Blessed Virgin, as the Archbishop of Canterbury, Thomas Arundel noted: “We English, being… her own dowry, as we are commonly called, ought to surpass others in the fervour of our praises and devotions.” Centuries prior, the Venerable Bede remarked, that,

A most excellent and salutary custom has arisen in the holy Church: daily [Mary’s] hymn is sung by all, together with the psalms of evening praise, so that a renewed remembrance of the Lord’s Incarnation enkindles the hearts of the faithful to feelings of devotion and a more frequent meditation on the example of the Lord’s Mother makes them strong, firmly established in the virtues. 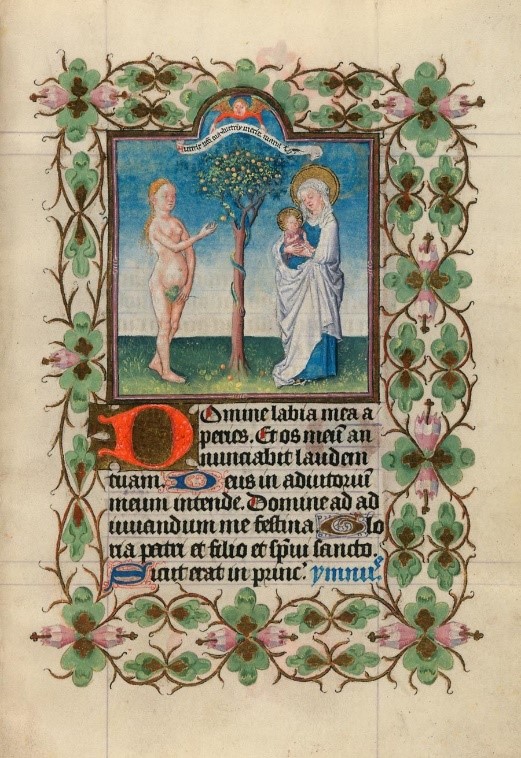 Our Lady of Walsingham, England’s Nazareth, was founded in the 11th century, and became an important site of Royal pilgrimage and patronage:

England, great cause have you to be glad … for in you is built a mansion to the honour of the Heavenly Empress and of her most glorious salutation, the first of her joys, when Gabriel said at Nazareth “Ave”.

Although the shrine fell victim to the iconoclasm of the Reformation, it was reestablished in the 1920’s, and has since established itself once again, as a site of pilgrimage for both Anglican and Roman Catholic Christians in England, and beyond. A proto-shrine can even be found here in North America, in Sheboygan, Wisconsin. On 4 May, the image of Our Lady of Walsingham was processed into Westminster Abbey and a festival was held in honour of the shrine, and in recognition its importance in England. 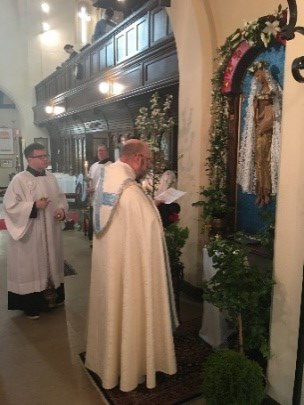 Whatever piety one might have concerning the Virgin Mary, whether entreating her to pray to her Son on our behalf, or regarding her simply as a humble girl from Nazareth who was chosen to bear the Son of God, all Christians can surely agree that “there’s something about Mary”. Since early on in the history of the Church, the Virgin Mary has captivated Christians of every sort and nation, inspiring their devotion.

The May devotion to our Lady can serve as a reminder of how important the Virgin Mary is regarding the role she plays in the Incarnation. The discussion of her exact nature and status once caused a major schism in the Church. And for good reason, since who and what Jesus is depends greatly on how Mary is defined. Thus, the title, Theotokos, “the one who gave birth to the one who is God”, was emphasized in the early church to counter the heresy of Nestorius, who divided the human and divine natures of Christ. As a well-loved mediaeval Christmas carol goes,

There is no rose of such virtue as is the rose that bear Jesu;
For in this rose contained was Heaven and earth in little space.

“The greatness of Mary”, to quote a recent joint Evangelical-Catholic statement, “is in her faithfulness to Jesus Christ, her Lord and ours.” Mary’s act of faith and her giving birth are at the beginning of the incarnate life and mission of the Saviour; the New Testament also depicts her gathered with the disciples on the day of Pentecost. She is at the foot of the Cross at the close of Christ’s earthly ministry. When other disciples had fled in fear, Mary remained. When from the Cross the dying Lord told John to see in Mary his mother and told Mary to see in John her son, we may understand that, symbolically speaking, John represents all the disciples through the ages who will love and honour Mary as the blessed mother of their brother and their Lord. Her message, first spoken to the servants at the wedding of Cana, and also to us, is simply this: “Do whatever he tells you” (John 2:5).

It is a happy coincidence that we honour the Blessed Virgin Mary on a day in which the secular world celebrates motherhood, and the Church commemorates Our Lord as the Good Shepherd. In fact, the Blessed Virgin brings these two worlds together, as biology, ecclesiology, and Christology are united in the person of Mary. She is the Mother of the Church, whose members are gathered in by the Good Shepherd, her son, our Lord, Jesus Christ. To quote Cyril of Alexandria in his sermon on our Lady at the Council of Ephesus in 431, “… may it be granted to us to adore with deep humility the indivisible Trinity. And then let us praise with songs of joy Mary ever virgin, who herself is clearly the holy Church, together with her Son and most chaste spouse. To God be praise forever.”

Pray for us, O holy Mother of God, that we may be made worthy of the promises of Christ.